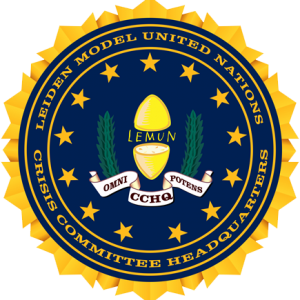 The Crisis Committee in general

The Crisis Committee has been one of LEMUN’s great successes over the last couple of years. Delegates, known as diplomates and working in pairs, will have to solve a series of crises during LEMUN, without knowing in detail what they will be confronted with. They will have to use their creative, research and negotiation skills to limit the effects of the crises that can range from riots to earthquakes and from war to epidemics. During the conference, a team of MUN veterans will form the ‘Crisis Committee Headquarters’ (CCHQ). The CCHQ does not only provide the input for the committee, but also acts as entities not present in committee so delegates can ask, for example, their government or an NGO for advice. As this committee is very demanding of its delegates, only students who have participated in at least two previous MUNs are able to become Crisis Committee delegate.

The CCHQ has written a special Crisis Committee Instruction Booklet to help delegates start preparing and explain the Rules of Procedure.

The Crisis Committee of LEMUN 2017 will focus on the Middle East. This interesting and unstable region has dominated the geopolitical world for decades and is a place where all the world’s most important powers meet. For years we, the CCHQ, have avoided this region due to its complexity and its abundance of existing problems. We have, however, concluded that we now have sufficient experience to attempt to tackle this region’s issues and add a few new ones of our own design. We implore our diplomates to arrive at the conference well prepared, for the complexity of the crises might otherwise be overwhelming.

Students who wish to participate in our Crisis Committee in 2017 have to register, in pairs, separately as Crisis Committee places are henceforward separated from their regular delegations. Registration can be done using this form.

This year we will host the following delegations at our Crisis Committee:

Future updates about this year’s session will be posted on this page.

This website uses cookies to improve your experience while you navigate through the website. Out of these, the cookies that are categorized as necessary are stored on your browser as they are essential for the working of basic functionalities of the website. We also use third-party cookies that help us analyze and understand how you use this website. These cookies will be stored in your browser only with your consent. You also have the option to opt-out of these cookies. But opting out of some of these cookies may affect your browsing experience.
Necessary Always Enabled
Necessary cookies are absolutely essential for the website to function properly. This category only includes cookies that ensures basic functionalities and security features of the website. These cookies do not store any personal information.
Non-necessary
Any cookies that may not be particularly necessary for the website to function and is used specifically to collect user personal data via analytics, ads, other embedded contents are termed as non-necessary cookies. It is mandatory to procure user consent prior to running these cookies on your website.
SAVE & ACCEPT