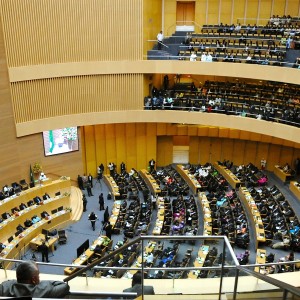 The African Union is a relatively young organisation, in which all African countries except Morocco try to achieve greater unity and solidarity between the African countries, and to promote peace, security and stability on the continent. Besides, it tries to increase the role of African nations in the global economy and international negotiations. The most important decision-making body of the African Union, comparable with the General Assembly within the United Nations, is the African Union Assembly of Heads of State and Government (AU-AHSG). This is the committee simulated at LEMUN. The normal Rules of Procedure apply, with the exception of ‘suspended’ member states: these do not have the right to vote.

This website uses cookies to improve your experience while you navigate through the website. Out of these, the cookies that are categorized as necessary are stored on your browser as they are essential for the working of basic functionalities of the website. We also use third-party cookies that help us analyze and understand how you use this website. These cookies will be stored in your browser only with your consent. You also have the option to opt-out of these cookies. But opting out of some of these cookies may affect your browsing experience.
Necessary Always Enabled

Any cookies that may not be particularly necessary for the website to function and is used specifically to collect user personal data via analytics, ads, other embedded contents are termed as non-necessary cookies. It is mandatory to procure user consent prior to running these cookies on your website.